Have you been told to raise the bar?

Sure you have. Usually it is a boss asking us to do more (with less).

Or, it is a coach pushing us to work harder, to do more reps at the gym, to run another lap at the track, etc.

Or, it is the person in the mirror saying, “You can do better.”

This is all fine. We do need to push. We should always be striving to get better at our craft.

But, we can take this too far.

Sometimes, what we really need to do is STOP raising the bar and instead, SIT AT the bar; take a break. Raise a glass to toast our accomplishments.

As important as it is to push, it is even more important to recognize our accomplishments. Take a moment to look around you. See how far you have come. See the good.

Invite your friends to join you in the toast.

Do you write your own music, or are you in a cover band?

How about your life? Are you forging your own path? Or are you only imitating what you see in others?

So many of us spend our days trying to reproduce what others have done, living our lives note for note like what we see in others. We follow the rules. We read how-to guides. We may be technically excellent at our craft. But, in the end, what we produce looks like it could have been done by 50 or 100 or 1,000 other people.

This starts young. “Why can’t you be more like Tom?”

It continues into adulthood, especially in the working world. “We could use a lot more Toms.”

And we do this to ourselves. We see someone we deem to be successful and think, “Hey, if I can just do that, I, too, will be successful.”

We invest in programs guaranteed to produce the same kind of results others have produced. “Follow these simple steps and you, too, can earn a 7-figure income while working from home in your pajamas! This is a limited time offer! Act now!”

It has long fascinated me how many cover bands are out there. I’ve seen some good ones. The good ones can make a decent income. They might even develop their own fan base. But, it has always struck me as limiting. The best you can do is a perfect imitation of someone else. Where’s the fun in that?

Be an original. Study from the masters, then paint your own masterpiece. 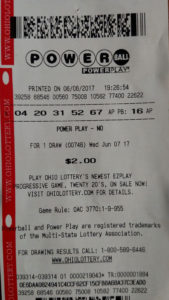 If you won the lottery, would you still work?

That question has been on my mind since the summer of 1984.

I was a starry-eyed recent graduate, happy to have my first real job as a bona fide Electrical Engineer and eager to prove myself. So, I was thrilled when, less than a year after I started, my boss asked me to attend a trade show where we would have a booth to show off our products.

The trade show was in Atlantic City at the big convention center right on the boardwalk. This was back when Atlantic City was still in its Heyday. It was exciting.

It was a major trade show for the scientific measurements industry. I had never seen anything like it. It was full of big-name manufacturers showing off their large sophisticated machinery with equally large and sophisticated names.

The exhibits were impressive. On display was a vast array of complex scientific research instruments, measurement systems, and elaborate demonstrations of these products.

Our booth was not quite so impressive. We had a fish tank and ping-pong balls. (I wish I had a photo. It was truly a sight to behold.)

But, it did demonstrate the basic functionality of our product. Its simplicity created an opening for a conversation. At least, that’s what we told ourselves.

Have you ever worked in a trade show booth? Those of you who have, know it is grueling work. At the end of our first day, we were exhausted.

But, we were in Atlantic City!

So, we left the convention center and headed out for dinner … to … the Playboy Club. That is a story for another time.

As we were walking along the boardwalk we passed a sign advertising the lottery and its current jackpot of $1 million. Remember, this was 1984.

That was when Lou, the founder and president of the company, asked me the question. “Hey, David. If you won the lottery would you still work?”

I may have been young and naïve, and believe me, I was. But, I knew a trick question when I heard one. So, I took great care with my answer.

After a reasonable pause to demonstrate I had appropriately considered the question, I confidently said, “Yes.” Lou seemed satisfied and we moved on, never discussing it again.

But, the question lingered in my head. In fact, that question became a guiding principle throughout my career. Because I knew that, “Yes”, was an incomplete answer.

The full answer, the one that I so carefully avoided saying out loud, was, “Yes, but not for you.”

As excited as I was to be there, I knew it was not a forever job. I knew this was just a starting point in my career.

Throughout my career, I have asked myself variations of that question on a regular basis.

One of the hot topics of conversation in the business world today is “employee engagement”. It’s an especially big buzzword in the HR circles.

Employee engagement, retention and satisfaction. They all tend to get lumped together. And I do think it is an important topic.

What is the first thing companies typically do when they want to measure these? Right. The employee satisfaction survey.

Have you ever taken one of these? I’ve done several. Some of them were quite lengthy. And that’s part of the problem.

If you truly want to measure employee satisfaction, you only need to ask one question.

“If you won the lottery, would you still work here? Why? Or Why not?”

If you believe employee satisfaction is important, the goal is simple. Create an environment where the answer to that question is a resounding, “YES”.

How do you do that? Obviously, there is no one answer for all situations. Since you are reading this blog, then you know that my primary answer is, “Make Work Fun!” How you do that is the real challenge – and worth the effort.

Let’s look at the personal side of this, though.

If you were taking this one-question survey and your answer were, “NO”, my question for you would be, “Then why are you still here?”

I’m sure you’ve worked with people who do nothing but complain. Day in, day out, the only thing that seems to make them happy is to tell you how unhappy they are, and how much they hate their job.

The only response to this is, “Then why are you still here?” And, “What are you going to do about it?”

We do have a choice. The choice is not whether or not to win the lottery. Although, if you want to win, you do need to buy a ticket.

Our choice is, what are we going to do about it? Why wait?

If you don’t love what you are doing, if you are not excited to get up in the morning, what’s holding you back from making a change?

Define your own jackpot. Print your own lottery ticket.

Live your life with a resounding, “YES”.

There, I’ve said it. Can we still be friends?

I also can’t stand to listen to the Beatles.

It’s not that I think watermelon is bad. And I certainly have great respect for the music produced by the Beatles.

But, I’ve had enough of both to last a lifetime.

Every summer as a kid, I went to Boy Scout Camp. One night during each camp session we had a family night. Parents and family would come for campfire where we would enjoy stories, skits and songs.

Our troop had a tradition whereby parents would bring watermelon for us to enjoy after the families had gone on their way. We would be up late into the night having watermelon eating races. The goal was to finish every watermelon before going to bed. With nearly a watermelon per kid, you can imagine we got pretty creative with the various ways of eating it all.

To this day, the very smell of watermelon makes me want to turn and run the other way. Please, no more!

The Beatles suffered a similar fate for me. Growing up, we took many trips in the car together as a family. We all liked having music playing, but as a family, it was often difficult to find something on which we could all agree. The Beatles became the one thing we could all accept.

Side note: Unlike the Beatle’s White Album, Cheech and Chong’s White Album (actually called the Wedding Album…) was the only record I recall that was completely banned from further play in the house. Which, of course, made us want to listen to it even more. Back to the Beatles…

Later, the Beatles gave way to Paul McCartney and Wings. Same thing for me. I’ve had enough.

Our 8-track copies of these albums were well worn by the time I headed off to college.

When you’ve listened to these songs as much as I did as a kid, hearing them as an adult yields two possible outcomes. Either you would be struck by fond nostalgia, or, as in my case, quickly reach for the buttons to change the station (or playlist).

My reactions to both watermelon and the Beatles at this point are visceral.

What are your triggers? What things, events or situations bring about these types of strong negative reactions for you?

Are there things in your work environment that cause you grief, but that many others find to be pleasant? Maybe they were great at one time, but now it’s become too much of a good thing.

What about your staff?

What have you been doing the same way for so long that you (or your staff) simply can’t tolerate doing it one more time?

I’m not suggesting that you ban watermelon from your company cafeteria, or that you never allow the Beatles to be played within the office confines.

But, I do think it is good to look for places where changing things up might provide a much needed fresh perspective. Don’t wait until the smell of watermelon causes you to wretch – or your star employee leaves because they can’t stand the thought of having to submit a weekly status report in that same blasted format one more time.

Also, make the change real. The Beatles “unplugged” is still the Beatles. And that is so yesterday.

Go ahead, make a change. Make it bold.